So today is Opening Day of MLB and April Fools'Day

I am in the process of deciding who to start and who to sit.

My position eligibility is limited - I have some studs who must sit this week but whom?

As you can see I have 3 high level players for 1 position - Third Base.  I also have 2 premier Shortstops and 1 player, Shohei Ohtami who can pitch or hit, as a hitter he qualifies only as Utility for now.
One of the first things I do with hitters is look at the number of games scheduled.
Eugenio Suarez has 3 games at home - the friendliest ballpark for hitters other than maybe Coors Field in Denver.
Devers is also playing at home and in a hitter friendly park in Boston against maybe the worst pitching in the MLB in Baltimore.
Moncado had 4 games all away in LAA.  LAA pitching is an unknown at the moment - they could be great or just so-so.
Based on games played, Moncado wins.
Next, I look at the computer projections for the week.
Looking at the projections, Moncado is the leader.
So I changed Suarez for Moncado.  Trevor Story remains as my Utility hitter this week.  Devers, Suarez and Ohtani are on my bench. 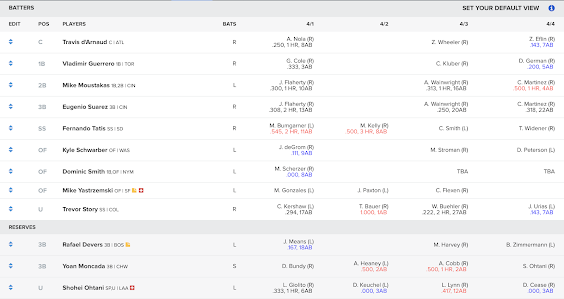 Note you can also view the scheduled matchups to help decide.  A player playing 4 games but against a top pitching staff like LAD or SD for example might be sat while I play a hitter playing Baltimore in Baltimore for example.  Don't ignore who and where the games are being played.
Next pitching.

Here I have fewer options.  I could move Ohtani who is scheduled for LAA's 4th game BUT he is coming off his last spring game where he developed a blister and for now he remains 6th among my starting Pitching options so I leave him on the bench this week.

My relief pitching is where I have options.  I have 4 pitchers for 2 spots.  3 of those pitchers by design are Starting Pitching.  With this being a 4 game week, neither Peralta nor Quintana are scheduled to pitch.  Both are scheduled for next week.  Oakland has NOT announced their pitchers yet for games 3 and 4 so it could be AJ Puk or might not.  So I start AJ.

My theory is that a starting pitcher should outpoint a Closer on average every week.  As the season progresses we shall see.  There are only 5 starting pitchers who qualify as Relief Pitchers to start the season.  I have 3 of them on my roster and the other 2 on my watch list.  I am thinking most weeks Peralta will be the go to pitcher here especially early in the season.