Setting my Lineup - Head to Head leagues - One Tip 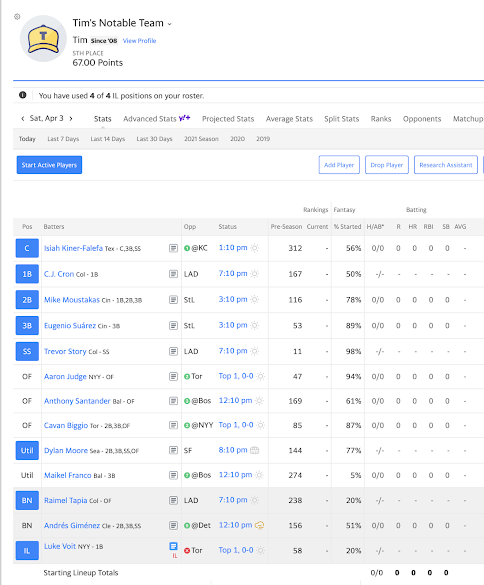 Do as I say and not as I do?  I missed using my lineup trick yesterday because I got busy in my yard and lost track of time.  It ended up not mattering BUT over a course of a fantasy season, this one lineup trick could add crucial points and be the difference in winning or losing.
So what is the tip?
You will notice in the screenshot, I have Maikel Franco starting as Utility.  That is my mistake.  Not playing Franco BUT having him occupy the Utility Spot when he has an early game.  Franco only qualifies at 3B and Utility.  Since his game had started (yesterday), he was locked into Utility.  I couldn't move any other player there.  So what happens if Suarez doesn't play at 3:10 pm?  I could lose a hitting position for the day.
In this type of scenario, I like to MOVE the player whose game starts early into their Position and the player starting later into the Utility position.  So here I should have moved Franco to 3B and Suarez to Utility.  Then if the later games gets postponed for bad weather OR the player sits that day, I can put another player into the Utility spot such as Tapia who is an Outfielder.
Since I had Dylon Moore playing OF and he was eligible to play 3B, I wouldn't have been hurt IF Suarez ended up not playing.  I would have moved Moore to 3B and Tapia to OF.
In hindsight, I should have played Tapia.  He homered in his game and I had him sitting.  That's fantasy baseball.  Sometimes you win; sometimes you lose.  You set your lineups based on your best "forecast" but sometimes good players don't play well and sometimes players for whom you have lower expectations outperform those expectations.
Hope my lineup tip helps you in the fantasy season.
Posted by Tim New at 9:55 AM