Kohei Arihari is Japanese and thus relatively unknown (thus sleeper) and unheralded in MLB Fantasy circles except by those who get paid to follow and write or broadcast about Fantasy Sports.

He is playing for a Texas Ranger team without name recognition pitchers. 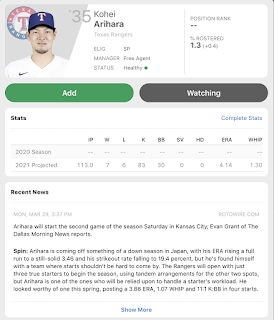 He throws 7 different pitches.  He is playing in a revamped Texas stadium which in shortened 2020 indicated that fly balls wouldn't fly out of the ball.  MLB revised the baseball itself so it has less get up and go and Texas has young unheralded Outfielders (and infielders).

Big league hitters won't have a lot of information on this pitcher.  That gives the pitcher an advantage.  The big question mark for me is run support - will Texas score enough runs for Arihari to get wins or will he throw innings and walk away with a no decision or loss due to lack of support?

I plan to claim Kohei off the waiver wire in one of my leagues today replacing Brad Keller - KC SP.  I added Keller because he has the start today.  Tomorrow it will be Kohei's turn.  Roll the Dice.  The season is young.