CBS get a D on their Fantasy Sports Draft list.  The CBS Sports predraft process is worse, much worse than Yahoo Sports or ESPN.  The process to organize players into an intelligent list predraft is cumbersome and time consuming. 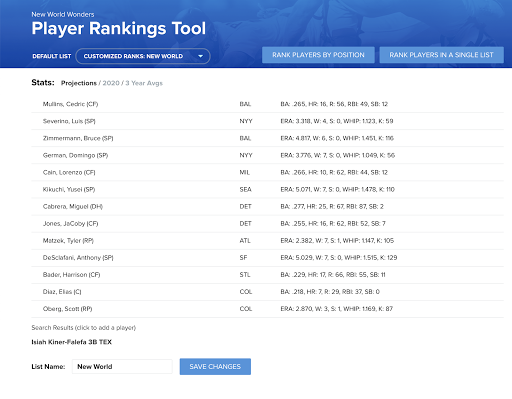 Players seem to be listed haphazardly - no real system to begin.  Really good players are somewhere way down the list.  Others are not even on the initial list.

To add the player you must go all the way down to the bottom of the players listed, many whom no one in their right mind will even draft, and then type a name or part of a name, select the player from a list that pops up, click to select the player.  The player now appears as the last player on the long list of players.

BUT be careful.  IF you add another player by name, as I did, then that player you just added replaces the player you just previously added - they go off the list.  Great, huh?  You think, ok, add a player, move them up the list, then  add you second player since the last player on the list is moved off the list to make room for your new addition.

There is just one problem.  The software won't let you move a player you add to the list unless you first save the list, then exit the list, then  re-enter the list.  Now you can move the player.  See how cumbersome that process is?  The initial process is already by far the worst of the three sports sites.  Now players who you want to add have to be added 1 at a time, save the list, exit the list, scroll to the bottom of the list, move the player you just added up the list, then you can add another player to the list.  Slow, frustrating process that makes me wish I had never clicked the Create a team button to begin with.

I still have 2 prospects to add to my draft list.  Jonathan India, 2B Cincinnati and Bobby Witt, Jr also 2B for KC.  Both appear to have won starting jobs in Spring Training and both have 15/15 potential - 15 homeruns and 15 SBs plus appear to hit well enough to get on base often which means runs scored.

This CBS Sports draft will be Saturday, the 27th - the final weekend before MLB begins.  A Points league is different from ROTO 5x5 or standard HTH leagues.  Also this league is with 10 teams rather than 12 so not as deep.

In a points league, you are more concerned with ON-BASE % and Total Bases for hitters - average isn't a concern but high K rate is.  For pitchers, you need innings pitched, Ks and limited walks.  You also want to be aware of Starting Pitchers who qualify as Relief Pitchers.  You start 5 SPs and 2 RPs - if all 7 of those slots are filled with quality starting pitchers you will rack up a lot of points.  This is especially true in leagues with weekly versus daily lineups.  The best Closer will have fewer points than a good starting pitcher.  I didn't say great starting pitcher, just good because you get points for Innings pitched and Ks both of which are limited for closers.  A closer does get 7 points for a save just as any pitcher gets 7 points for a win.