With my first draft of the season coming up tomorrow I joined a mock draft to test my idea of drafting hitters for the first 4 rounds, then taking a starting pitchers and 3 top closers.  I chose the middle position to test it out.  My results follow: 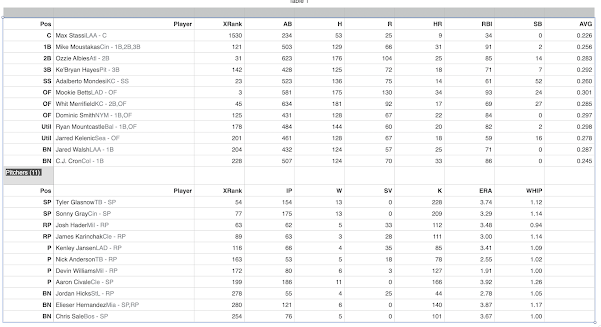 My first 9 picks were:

This projects me to finish 4th according to Yahoo.  That would be based on points and this is HTH.  Plus I think it undervalues the playing time of many of the players I choose - note the projected ABs for players like Dominic Smith and Ke'Bryan Hayes both draft targets of mine.  I expect both to be daily players so the projected ABs of 431 and 428 are low in my opinion.

I purposely took Chris Sale to test out which pitchers would still be left undrafted.  My plan tomorrow is to draft both Chris Sale and Noah Snydergaard and then place them on the IL and fill in from the waiver wire post draft.

Most drafts from the 6th spot will give me Mike Trout rather than Mookie Betts.  I may look at adding Colorado OF Tapia to my lineup to give me more runs - one area this mock draft (with the ABS projected) show me being weak.

Now I need to test it again from a low draft position like 12.