My first 2021 draft is set on Yahoo for Saturday, March 6

Remember I said it was important to “know” the league settings. 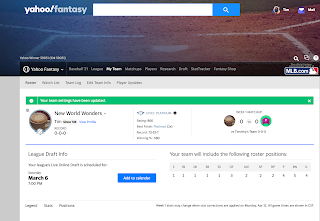 This league has what I consider a pretty basic lineup - C 1B 2B 3B SS OF OF OF and 2 Utility Players.   They also allow for 5 bench players and importantly 4 Injured.  Last year with Covid I felt at times I didn’t have enough IL spots.  4 is good.  2 is iffy.  0 is a nightmare.

Now go to settings (under League Tab) and check the scoring and other information. 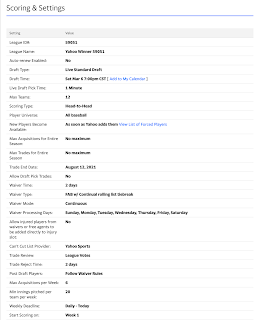 No Maximum for acquisitions on the season BUT there is a weekly maximum of 6 - that will allow some weekly changes but not full streaming of pitchers for example.

Note also that the pitching requirement of 20 minimum innings pitched each week.  That means you probably need a couple of pitchers each week who start and pitch 5 innings each.  Plan for 3 Starting pitchers minimum is better.

Note the “allow injured players from waivers to go directly to IL” is NO.  That means IF I want to add an IL eligible player to my roster (stash them for later), I need an empty spot on my roster first.  I may have another player who is IL eligible whom I can move to IL first and then add the new player, and then move them to IL or I may have to drop a player first.  Some Team Managers will drop very good players to waivers when they go on IL.  Some I will take knowing they will make a difference for my team after coming off IL. 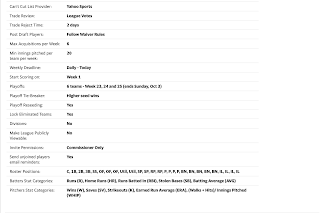 Now notice the Scoring - again this is now 5x5 scoring that is more or common (but not every league follows it so always check your scoring).  R+HR+RBIs+SBs form the core of the hitter stats along with Avg.

So now as I consider players to draft I am looking at my combined 4 (R+HRS+RBIS+SBS) as my tool.  I want players who give me the highest total BUT also need to keep an eye open for SBs and Avg.  For Pitching I am watching WHIP and K/9 while keeping ERA in mind but if their WHIP is good the ERA should also be good.  I don’t focus on Wins but try to draft a couple of SP1 (Pitchers who are the first tier pitcher for their team) plus 3 closers then get high k/9 low Whip pitchers even if they are not SPs or Closers.  Often a relief pitcher who gets 2 or 3 innings or even a setup pitcher who just pitches 1 inning will pick up wins while giving you Ks and low WHIP.  If yo have 3 good closers on your pitching staff, you can win 4 of the 5 Pitching stats each week and win your league.

Now you know your League Settings, it’s time to arrange your Draft List - Do NOT rely on the Default setting.

Next Blog - setting your Pre-Draft Rankings.