Yahoo’s PreDraft Rankings is certainly not aligned with my values.  If I leave their settings and miss the draft I will end up with a lot of pitchers early and miss key offense. 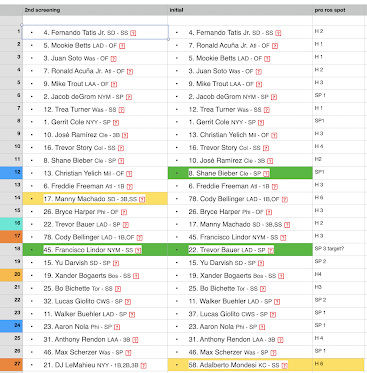 Adjusting the drafting list takes time but is worth it.  The default list by Yahoo is heavy on pitching and speculative.  Gerit Cole is their default # 1 and he is a good pitcher but for fantasy purposes, most will have Jacob deGrom drafting before Gerit Cole.  Why?  deGrom pitches at Citifield which is one of the BEST pitching parks in MLB.   But top pitchers aside, Yahoo’s default will have you drafting relief pitchers who not closers over hitters you need to win.

Of course, if all the other fantasy players follow Yahoo and draft Chris Martin before Cody Bellinger then it doesn’t matter.  But they won’t.  Some will enter the draft unprepared and their draft will suck.  Don’t let that person be you.

FantasyPros and MLB are 2 sites that provide a lot of free cheatsheets and of course ESPN (I haven’t even looked at ESPN yet this year for fantasy).  Look at their suggested draft order and I suggest starting with FantasyPros as your default.

Once you have taken the time to arrange Yahoo’s default drafting list into a better list, then adjust it.

For Yahoo 12 team Head to Head teams, you will draft 23 players each so 276 players in total.  Collectively, the 12 team will need to draft 120 hitters and 96 pitchers plus 60 bench players.  Those 60 bench players could be all hitters, all pitchers or a combination (most likely).  So your draft list needs to have only about 300 players.

Among those 300 players on your list, you should have players you want to take in the later rounds who have upside.  By round 20, your basic team is set.  You can take a chance on a breakout player or a prospect OR take an injured player.  If you take an injured player, you have 4 IR spots so after the draft, place the injured player on the IR and replace them with a player from the undrafted pool.  This year you have both Chris Sale (Boston Starting Pitcher) and Noah Syndergaard (New York Mets) starting pitcher on the IL coming back from Tommy John Surgery and Yankee Pitcher Severino who never fully recovered last season.  All 3 could be useful stashed on the IL - You don’t want to use all 4 IL spots on drafted players since once the season begins you will need to use the IL for some of your rostered players who get injured. But using 1 or 2?  Why not.  Worst case you can drop them if necessary. 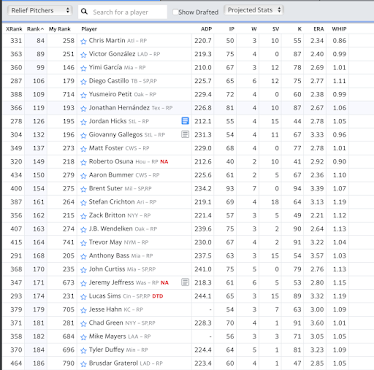 once you think you have your 300 players listed and aligned as you like, test the list by doing a Mock draft.  Select using your draft list in the mock draft.  I suggest doing at least 3 mock drafts - draft from position 1, middle and last.  You don’t know the draft order until just before your draft so see how your team looks if you draft from 3 different spots. Then adjust your draft list again to fix any problems you spot - maybe you need to move a hitter up or a pitcher or you may be able to move somebody down.   The screen shot above shows a mock draft on Yahoo - note I selected to use my draft ranking list so the software now shows - my ranking, Yahoo's default rank and what they call XRank which I think stands for experts ranking.  You can toggle between them and this is useful IF you have a lot of players who didn't create their own custom list.  You can get an idea of who the system is suggesting they draft at that moment and anticipate when your targeted player may be drafted.  Play with it in your mock drafts so you are comfortable using it come draft day.  Also play with Search for a player BUT if you customize your draft list before the draft day, that shouldn't be a problem.  For example, Texas Closer Jose Leclerc won't be in Yahoo's default listing.  They have him at 1960 or something.  You'll need to adjust the list so you see him if you want to draft him or use the search feature - better to add him before the draft.

Finally, monitor the news before the draft and adjust your list or draft plan accordingly.  For example, Houston Pitcher Framber Valdez was a “hot" pick going into the preseason based on last year.  He was being drafted about 100 so 9th round.  The first day pitching in spring training?  He fractured his ring finger.  That will impact his value.  Drafting him at 100 is now too high.  His training will be disrupted so expect him to pitch fewer innings this year than originally projected.