So you have completed your initial draft list.  You have rearranged the league standard list into a list more aligned with your own ideas of this person should be drafted before this person.

Now it's time to make the final preparations for the draft.  A bad draft doesn't mean you should throw in the towel BUT a good draft makes winning easier.  So let's start with a good draft.

Mock Draft - doing a mock draft will help you have a successful real draft in fantasy sports.  I did several mock drafts at Yahoo Sports  using my predraft list and from different positions in the draft - early pick, middle pick and last pick.  The software graded my draft as a B which is OK with me because I disagree with some of their projections.

I sort my draft list using batting average and color code the results: 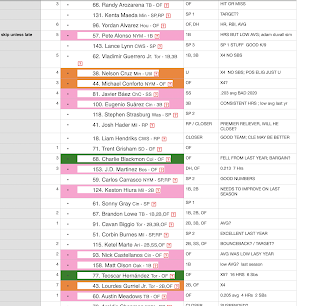 When I used actually statistics from 2020 - shortened Covid impacted season - I get a lot of hitters who hit well - Orange = >300; Dark Green = .290 and higher but also pink <0.250, yellow <0.270    I try to avoid hitters whose average is below 0.250 because avg is one of the 5 hitting stats and a couple of players below 0.250 means you will risk always losing that stat.  Instead I try to find hitters with similar profiles with better averages.  Preferably hitters who don't have yellow or pink colors.

I also sorted using Fantasypros projections for 2021.  There were only 4 hitters projected to hit above .300 and several hitters who had horrible 2020 seasons (in the pink) are projected to rebound in 2021.

I don't have the same metrics for pitching as I have for hitting.  For hitting I can use the Total 4 score (R, RBIs, HRs and Sbs) plus color coding.  This is especially good for points leagues.  In Head to head I must still maintain a sense of balance - do I have enough HRs?  Enough Sbs?  I want to win 3 out of 5 stats each week in hitting and 3 in pitching. 6 out of 10 = win.

So for pitching - wins, saves, strikeouts, WHIP and ERA.  I focus on getting a couple of pitchers who will be Starting Pitchers 1 or 2 on their teams who have good WHIP, ERA and Ks.

I need 20 innings minimum so I focus more or Relief Pitching by trying to draft 4 closers.  If I get 4 quality Closers then I should win Saves, WHIP and ERA.

With Starting Pitchers who give me high K/9 I may also win the K category and maybe even wins.

So of the 8 pitching slots, I try for 3 SPs and 5 Relief Pitchers with at least 4 of those 5 being closers.  I then add 3 more pitchers for pitchers for the bench with at least 1 being a reliever who has Starting eligibility such as Seth Lugo or Diego Castillo.  The other 2 may be High Upside Starting Pitchers who have good K/9 and limited risk for ERA.  Elieser Hernandez from Miami is one such pitcher I am targeting late.

Please NOTE:  If you are playing in a league that is points or Roto, these pitching tips won't work.  They are good for head to head.